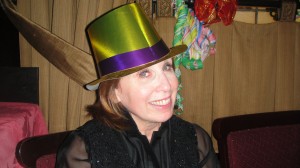 My father-in-law, Charlie used to say that New Year’s Eve is for amateurs. People who rarely go out during the year “doll themselves up” to let loose. “What’s all the fuss about?” he would shrug. “It’s just another day.”
Each December 31, we would quote him, and obviously, I still do, but I love New Year’s Eve so, of course, we’d do something fun to celebrate.  Jimmy was enthusiastic, too.  He would say, “I always get the last word, “Yes, dear.”
For me, it’s not just New Years that’s exciting. I even get a tiny surge as I turn the calendar to a new month. Starting fresh with a clean slate is wide open to possibilities.  And, Mondays, also – most dread Mondays.  Not me.
Of course, I don’t have a 9-5 workweek.  I don’t wrestle with that kind of stress.  I’ve heard that the most common day for a heart attack that kills you is Monday at 9 AM.  This is why I chill out Monday mornings and stay in my pajamas as long as possible.
Over the years, our New Year’s Eves varied and like everyone’s lives, some were memorable and others not.  Still, wherever we were for that launch of the new year, it was always a thrill to countdown from ten to zero and sing along to Auld Lang Syne.
We even bought an inexpensive organ one year and I practiced for weeks to learn how to play that song.  I finally sort of got it but it would have taken an awful lot of notes for any one to guess it on “Name that Tune.”  That stupid organ must have been broken.
There was nothing ho-hum about New Year’s Eve 1980.  I went into labor with my son and he was born on New Year’s Day.
Two years later, my father-in-law died on December 29th and ironically the family spent New Year’s Eve at his wake.  It certainly wasn’t “just another day.”
The world didn’t end and computers didn’t even crash as 1999 ticked to 2000 and, of course, everyone’s got a ‘where were you when’ story. Mine isn’t worth more than a  mention. We were on the Las Vegas strip feeling that scary Times Square squash from the crowd.
Fast forward to 2005, our last New Year’s Eve together.  We went to Atlantic City with with another couple.  Since it was the day before our son’s 25th birthday I asked him, “Doug, do you want what’s in the envelope or half my winnings?”
He hesitated because he knows that nine out of ten trips I lose.  Still, he grinned and said, “I’m going to go with ‘The Mouse.” (He calls me ‘Mouse.’)  He obviously inherited his parent’s degenerate gambling gene.  BUT – late in the afternoon of New Year’s Eve day when the others were napping I won $2700 in some silly slot machine that called my name.
The years keep passing, the calendar keeps flipping, and, yes, I have had some good times, even a meaningful one on a New Year’s Eve since then.
Next week I have no plans and that is fine with me. After mid-night, it will still be January 1st –  another fresh start.
Happy 2012 everyone!